In this post we give a brief overview of S-band transmitters and transceivers and share listings of multiple products available on the global marketplace – if you would like to skip the introductory material and instead get straight to the product listings, please click here.

Traditionally, the S-band was very popular for satellite tracking, telemetry and command in spacecraft operation. However, with the invention of CubeSats, the UHF/VHF bands saw a rise in popularity due to the lower constraints (e.g. omni-directional antennas and low cost) while operating in these bands. Given that the technologies in many of the payloads on board CubeSats are also maturing and so require higher data rates for telemetry, the S-band is gaining greater traction in the CubeSat world too.

From a regulatory standpoint the S-band offers an advantage by potentially mitigating the paperwork for two separate bands (UHF/VHF). However, S-band transmitters need antennas that are directional, and when the satellites are still in tumbling mode establishing contact can be very challenging.

Therefore, teams need to ensure that their satellite can de-tumble and point quite well in order to establish communications with the satellite if they use the S-band alone and in order to have a good link.

S-band based Software Defined Radios (SDRs) are also highly popular due to the flexibility they offer in terms of architecture and implementation.

Several suppliers are now focusing on developing S-band transmitter solutions with the CubeSat form factor in mind and are optimising the power, mass and size constraints of their transmitters to align with the structure, volume, and power consumption of CubeSats.

S-band transmitters on the global marketplace

In the section below you can see an overview of several S-band transmission systems available on the global market that can be used by CubeSat and small satellite developers to fit their telemetry and telecommand requirements.

We have also previously published overviews of the X-band transmitters market segment and the emerging optical communications segment.

You can click on any of the links or images below to find out more about each of the products and can submit a request for information (RFI) on the pages that open or send us a general query using our RFI tool and we will use our global network of suppliers to find a system to meet your needs.

EWC15-C S/S band Transceiver CCSDS – EWC15-C is an enhancement of the well-known EWC15 S/S band transceivers which have flown in missions such as ROSETTA and DEEP IMPACT. More than 40 units have been delivered and commissioned with many of them already launched. The EWC15-C is COTS-based and designed for the microsatellite/medium-sized market, with extremely low power consumption, compact, all-in-one and high reliable design (RX & TX in a single box). It is also CCSDS-compliant (waveforms and full duplex transmission/reception).

EWC31 S/S Band Transponder – is specially designed for Cube-, nano- and medium-sized satellite platforms, and for minimum of 2 years’ LEO lifetime. The model is a miniaturized version of Syrlinks’ typical output in terms of performance and reliability (e.g. it features aggravated tests in COTS, smart protection against SEL and additional safeguards). A range of advanced features are included, with a large panel of high-end options such as waveform, bitrate, tracking, and NADIR/ZENITH configurations. It is also CCSDS-compliant (waveforms and full duplex transmission/reception). The EWC31-RX S Band Receiver is an S band CCSDS uplink. This receiver is the uplink of the EWC31 S/S transceiver and has the same product concept, design, reliability.

EWC29 S/S Band Transceiver – series are the 2nd generation of Syrlinks’ CCSDS S/S Band transceivers/transponders, available in ESA Class 3 and Class 2. The products are based on space-qualified components and are fully compliant with the ECSS-Q-ST-60C CLASS 3 or CLASS 2 standard. The EWC29 series offers a large array of high-end options, particularly Doppler and Ranging features. The systems are CCSDS compliant (waveforms and full duplex transmission/reception). The EWC29 series were developed as part of the MYRIADE EVOLUTIONS program, led by Airbus D&S, Thales Alenia Space, CNES, ESA and Syrlinks consortium. Several units have already been commissioned and are planned to be launched in missions including MICROCARB and MERLIN.

The TX-2400 S­-Band Transmitter by SpaceQuest 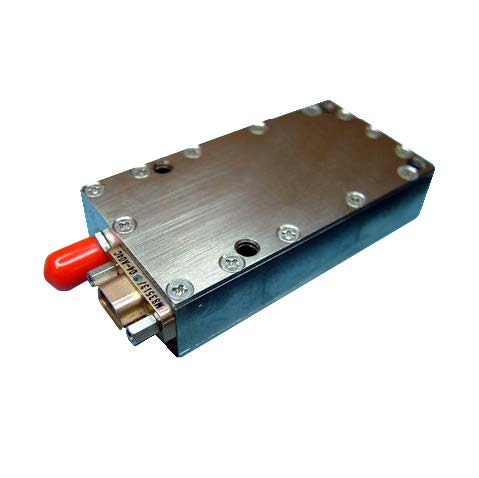 A proven satellite and launch vehicle S­-band transmitter with built in FM/FSK modem for downlink of payload data and telemetry. The TX­2400 has been a workhorse for SpaceQuest’s own satellites and their customers for over a decade. It weighs 70g and operates in the frequency range 2000 – 2400 MHz with a data rate of <6 Mb/s.

HiSPiCO S-Band Satellite Link – a transmitter system for S-band communication links from small satellites in LEO. Designed to offer a cost-effective, miniaturized, low-power solution for Cubesats and it has achieved TRL9. The wideband downlink system provides a maximum data rate of 450 kbps to 1.7 Mbps at frequencies of 2.1 – 2.5 GHz and optional patch antennas are available.

Slink – a highly integrated S-band transceiver system with high levels of technical performance and versatile configuration options. The radio system can be adjusted in the frequency band between 2.200 and 2.290 GHz for the downlink and between 2.025 and 2.110 GHz for the uplink, e.g. for telecommand purposes. Adaptation for different data rate requirements is also possible.

Typical net data rates are up to 5 Mbps in the downlink and 64 kbps in the uplink, with various protocol options including CCSDS. As a special feature, wideband inter-satellite communication links for distances up to 400 km between 2 satellites can be provided.

Slink-Phy – the Slink-Phy system is very similar to the Slink, although instead of a SMA, 50 Ω, RF connector and 2 x DSub15 connectors it instead features an UMP/SMA, 50 Ω (pigtail cable) RF connector along with Picoblade 10-pins (Power) and Hirose DF9-25S (Data) connectors. The transceiver equipment can also fit into a 1U form factor satellite.

Both the SLINK and SLINK-PHY satellite transceiver models have gained space heritage and are at TRL9. In addition, suitable patch antennas for 1U satellites, with separate Rx and Tx patches, can be provided.

The SWIFT-XTS and SWIFT SLX by Tethers Unlimited Inc.

The SWIFT family of flight heritage Software Defined Radios (SDR) are designed to provide high-performance communications for small satellite operations. SWIFT radios are built on a modular platform and the modularity of the SDR architecture provides diverse software control of any RF parameter.

The SWIFT-XTS features an S-band downlink rate of up to 3 Msym/s and operates with a frequency of 1700-2350 MHz. It features integrated framing with deep store-and-forward buffers, automatic frame-sizing and padding.

The SWIFT SLX operates within the 1750-2300 MHz transmit band and 1700-2350 MHz receive band. The system is 100% re-programmable with fail-safe boot modes and typically operates with an LEO maximum of 1 Msym/s up and 3 Msym/s down. 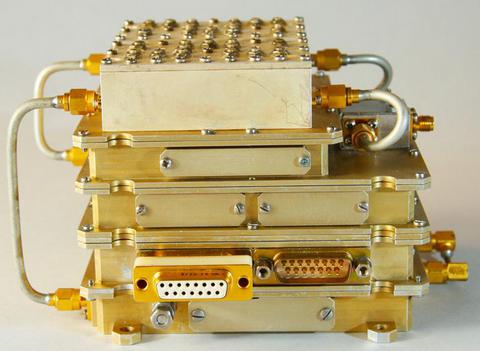 The SBTRcvr performs typical on-board telemetry and command functions in microsats. It is composed of two different functional sections, receiver and transmitter, and is based on well-consolidated analogue architecture. The system is based on a robust and standardised surface mount device (SMD) manufacturing approach and reliable FR4 and Polyammide Printed Circuit Board.

The selection of COTS devices has been made in order to have reduced sensitivity to radiation and a radiation hardness level of 10 krad has been considered a key design parameter. The modular approach allows deviation from the basic design. Using COTS-based products for LEO missions the system can act as a transmitter for high data rate transmission and command receiver for various modulation formats and frequency bandwidths. 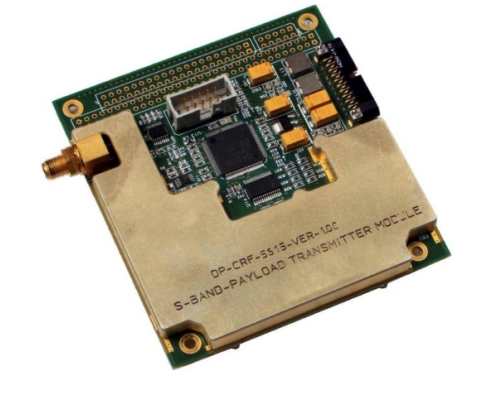 Data Pattern’s S-Band Transmitter is a PC104 form factor based transmitter module specifically designed for high data rate downlink requirements. The module is operated with a +5V and +3.3V regulated supply. The complete functionality of the module is achieved by two major design blocks the digital controller and the RF transmitter. 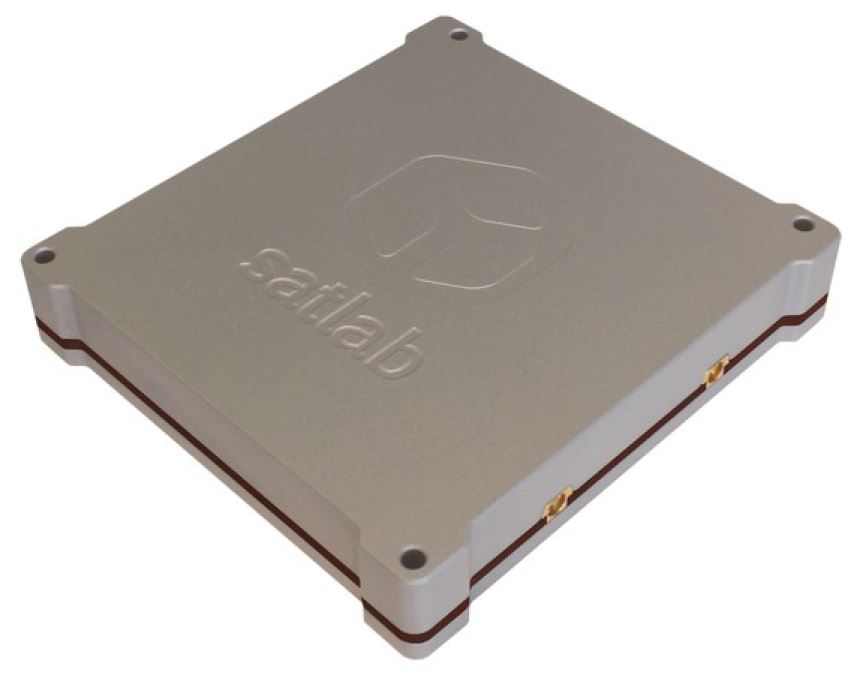 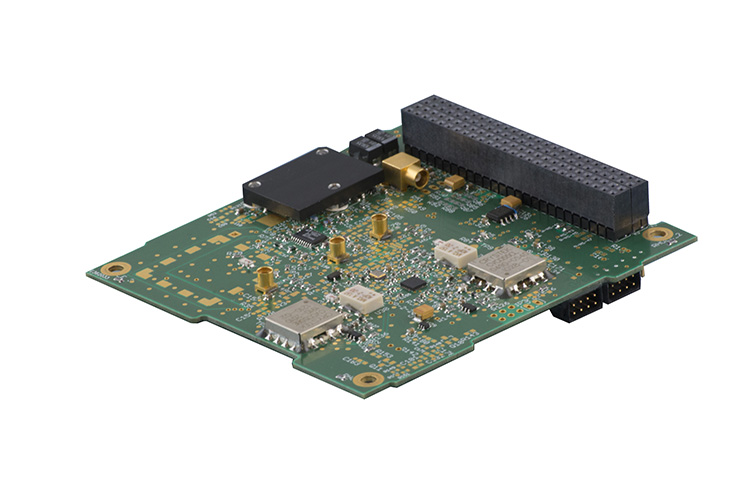 The ISIS High Data-rate S-band Transmitter is a CubeSat compatible Transmitter designed to meet the needs of high data-rate downlinks of up to 3.4 Mbps (information bit-rate at CCSDS transfer frame level). The transmitter can be used for both TT&C or PDT downlinks. The S-band transmitter is designed to be robust and flexible, implementing CCSDS as datalink layer protocol and allowing in-flight configuration of data-rate and RF output power.

Addnics Corporation manufactures a range of S-band transmitter and receiver equipment for satellites:

A88 series S-Band Transmitter & Receiver – Operating in the frequency range 2250-2300 MHz for transmitter and 2050-2100 MHz for receiver, the system has an RF power value of 0.1W and features BPSK modulation and PCM-PSK-PM demodulation.

Microsat S-Band Transmitter and Receiver – Operating in the frequency range 2250-2300 MHz for transmitter and 2050-2100 MHz for receiver, the system has an RF power value of 1W and features BPSK modulation and PCM-PSK-PM demodulation. 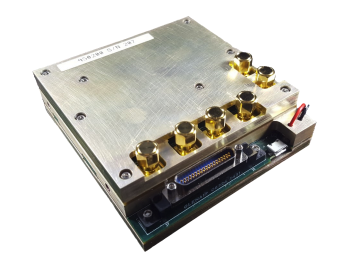 The S2DR 1000 is a software-defined radio hardware and software solution designed to provide rapid development of powerful and flexible small satellite payloads. The system provides dual software defined high performance RF transceivers which can be customized to the unique mission requirements of scientific and military missions for LEO CubeSat deployment. 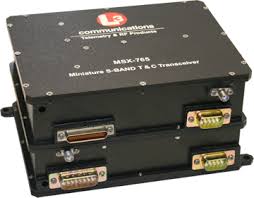 The MSX-765 was designed to meet the next-generation needs for command reception and telemetry transmission for U.S. Department of Defense (U.S. DoD), NASA and commercial high-reliability satellite applications, where mass is critical and higher uplink command rates are required. The MSX-765 is a DSP-based design using technologies developed for the CXS-2000 multi-mode, multi-band transponder. 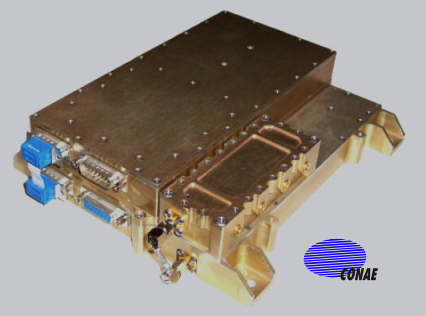 A light, compact module with radiation hard components and FPGA technology capable of BPSK or QPSK modulation up to 10 Mbits. Featuring a high-efficiency linear GaAs FET 5 Watts amplifier and a raised cosine pre modulation filter. The system includes a linear amplification and output filter to insure clean channel and low spurious for spectral use as well as a low component count to insure high MTBF. The module meets FCC, ITU and NTIA emission standards and MIL-SPEC, Industrial or S class screening is available. 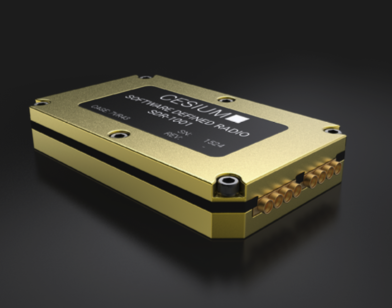 A high-performance, compact software-defined radio designed to operate in Low Earth Orbit (LEO) environments. The Cesium SDR-1001 includes four receive channels, four transmit channels, and a state-of-the-art FPGA in a credit-card-sized footprint. The module is suitable for demanding digital signal processing and communications applications. It can be used as a stand-alone SDR or combine with other Cesium modules for a complete bits-to-photons solution. 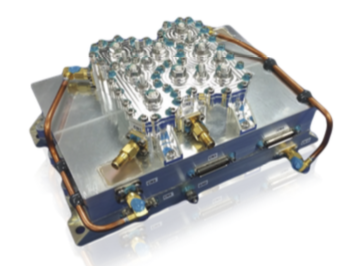 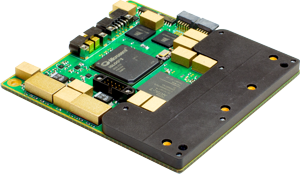 Reliability is ensured via hot redundant transceivers and an advanced FDIR unit that supervises the SDR logic. The full duplex communication subsystem is compliant with CCSDS encoding/decoding with configurable modulation parameters and data rates, and is capable of delivering up to 1 W output power. An efficient add-on RF amplifier module is available to boost power output power up to 5 W.

Thanks for reading! If you would like any further help identifying an S-band transmitter for your specific needs, please file a request on our platform and we’ll use our global network of suppliers to find an option.

Have you noticed that your product isn’t included in this article? Simply send us an email today we’d be happy to work with you to showcase it to the satsearch community!