De-orbiting technologies for satellites: active and passive end-of-life systems on the global market

De-orbiting technologies are developed to drag satellites to the graveyard orbit and, in the process, help minimize the risk of space debris.

In this article we give a brief overview of how satellite de-orbiting technologies work, followed by an overview of systems available on the global marketplace for space.

If you are familiar with the technology and would like to skip straight to the product listings, please click here.

The potential for widespread space debris could, if substantial enough in the relevant orbits, have an impact on space stations, all satellite services, and even on future launches. In the most extreme case, the generation of a large, self-sustaining debris cloud (described as the Kessler Syndrome) is an enormous potential risk to a huge swathe of the industry.

In addition, many companies and organizations are increasingly seeing the reduction and mitigation of space debris as a core value in future missions and services in its own right.

These opinions and developments have seen a number of de-orbiting systems being proposed in the space industry, in order to provide solutions for moving obsolete systems out of operational satellite orbits.

Several government organizations, including the European Space Agency (ESA), have shed enough light on the issues to encourage the participation of commercial players seeking to resolve the space debris problem. Although a lot of complexities and challenges remain, some companies have brought tested de-orbiting technologies to the market for satellites at various sizes.

To better understand this emerging technology class, we will first discuss the basic concept of the de-orbit maneuver and then look at two categories of systems available on the market.

Please note that we have opted not to include thrusters and propulsion systems in this article as this is a much more well-established technology category, with a large number of suppliers and models on the market. We have previously put together an overview of products in this category that can be found at this link.

Satellites often carry an on-board propulsion system, which helps them navigate and re-position in appropriate directions.

As the NewSpace race has intensified, various small satellite setups have become popular in the global space market, some of which do not carry a propulsion system, which would possibly have helped them drag across the graveyard orbit at end-of-life or during the decommissioning phase.

De-orbiting systems can be segmented into passive and active systems. Passive systems are generally integrated onboard a spacecraft and, when the satellite reaches the end-of-life part of its mission cycle, act as a drag-causing system to help move the satellite into the graveyard orbit.

On the other hand, active systems refer to external de-orbiting services or products specifically designed to move satellites in the graveyard orbit.

Passive systems have gained more momentum in the recent years; primarily due to ease in deployment and the growth of economically viable technology. Several organizations and companies have invested a significant amount of funding to bring more innovation in passive de-orbiting systems to market.

One of the most popular projects in Europe is the Electrodynamic Tether Technology for Passive Consumable-less Deorbit Kit (E.T.PACK). The E.T.PACK project is funded by the European Commission (EC) under the umbrella of the Horizon 2020 program and aims to develop ‘Deorbit Kit (DK) and related software based on Low Work function Tether (LWT) technology with TRL 4.

With over 3 million Euros in total funding for 45 months (March 2019 to November 2022), the project is being carried out by a consortium including the University Carlos III of Madrid, Fraunhofer IKTS, Technische Universität Dresden (TUD), Università degli Studi di Padova, SENER Aeroespacial, and Advanced Thermal Devices (ATD).

Such projects to bring innovation in the passive systems sector will help the space industry harness low costs and sustainable technologies to overcome space debris and defunct satellite issues. To further take a deep dive into the passive de-orbiting systems and products, in the following list are some of the companies whose passive de-orbit systems are included on satsearch:

Considering the ease of their operation and deployment, passive systems are often the most preferred options in the de-orbiting domain.

But with recent advancements in NewSpace technologies, in which companies have developed innovative products at cost-effective price points, active systems are gaining traction.

Active systems are more complex in design and require a thorough understanding of operations before the full deployment in space.

Such systems primarily consist of a separate spacecraft, particularly designed to de-orbit the objects in space. Astroscale, ClearSpace, D-Orbit, Momentus, etc. are some of the well-known players developing active systems, which are potentially set to be deployed in this decade.

With on-going developments in the active systems, and considering growing demand from several public and private entities, active systems’ success could become very important for the industry’s efforts to counter the space debris issue and fuel innovation in Space Situational Awareness (SSA).

De-orbiting systems on the global market

In the section below you can see an overview of several passive de-orbiting systems available on the global market.

We have also previously published overviews of the CubeSat thrusters and small satellite propulsion systems and a webinar on how to adopt a thruster for small satellite missions.

You can click on any of the links or images below to find out more about each of the products and can submit a request for further information on the pages that open or send us a general query using our free request system and we will use our global network of suppliers to find a system to meet your needs. 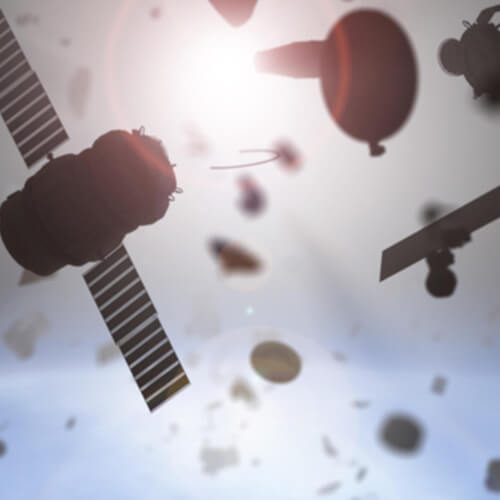 The Redwire Space ROC-FALL is a de-orbiting device with a one dimensional deployable sheet designed for space applications. ROC-FALL weighs less than 1 kg and is deployed using a TiNi actuator. It was launched onboard the OTB-1 satellite mission and will be ready for on-orbit deployment in 2023. 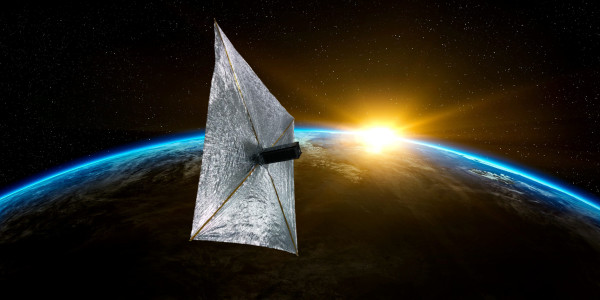 The NPC Spacemind ARTICA Deorbiting System is a passive de-orbiting system designed for CubeSats. The system is designed to allow the integration of sensors and devices on the bottom/up surface. The system deploys a sail of 2.1m2 and is designed to be completely stand alone in order to provide its functionality even in presence of satellite failure. ARTICA is designed to be mounted onboard the CubeSat. 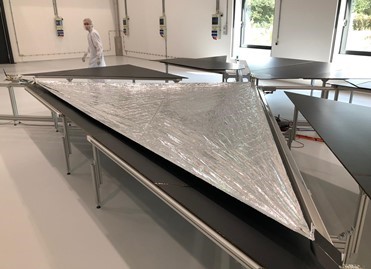 The HPS ADEO-L is a Deployable Drag-Sail De-Orbit sub-system designed for satellites ranging between 100 kg and 1500 kg. It has customizable sail areas, depending on the spacecraft mass and de-orbit time needs. The ADEO-L is an ITAR free product. 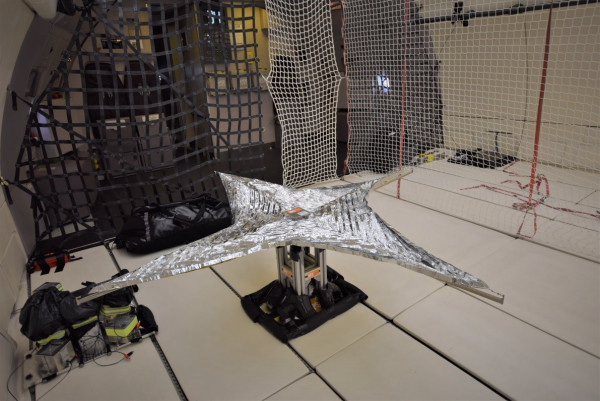 The HPS ADEO-N is a Deployable Drag-Sail De-Orbit sub-system designed for CubeSat/nano-satellite applications ranging from 1 kg to 100 kg. It has customizable sail areas, depending on the spacecraft mass and de-orbit time needs. Its initial deployment can be carried out by a simple signal. 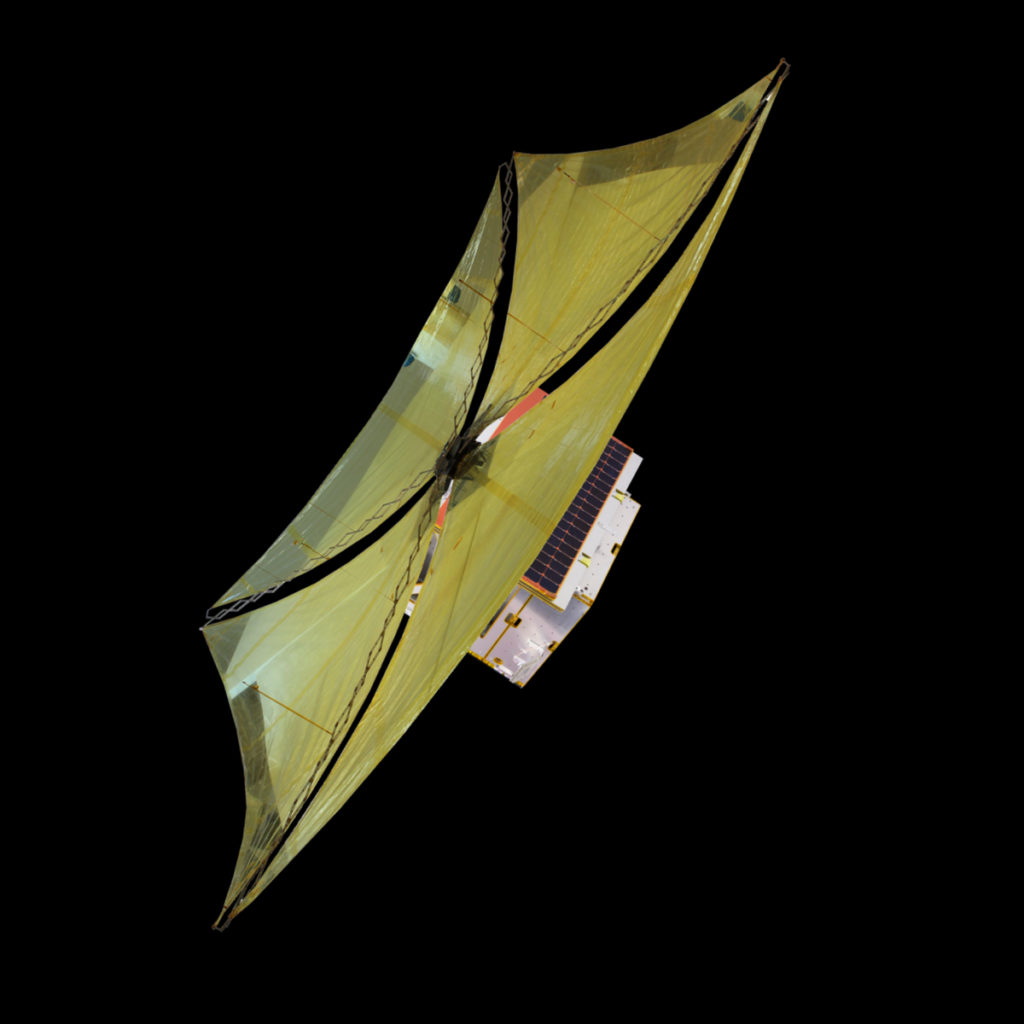 The MMA Design dragNET™ De-Orbit System is designed for LEO applications. It consists of an efficient and highly scalable packaging along with four compactly-stowed thin membranes that release using a single heater-powered actuator. It has a mass of 2.8 kg and can de-orbit a 180 kg spacecraft from an altitude of 850 kms in less than ten years. 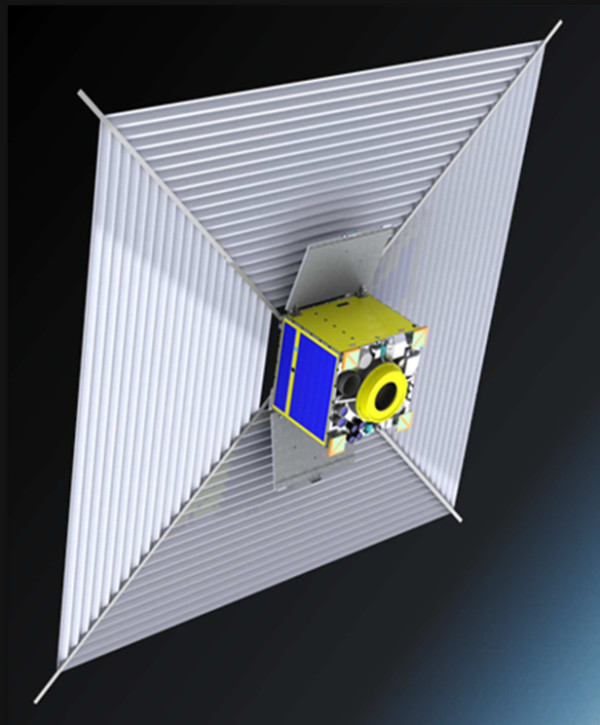 The Nakashimada Engineering Works De-Orbit Mechanism (DOM) is designed for LEO applications for satellites ranging between 1U to 50 kg. The product has three different dimensions and mechanical interfaces named the DOM500, DOM1500, and DOM2500. The DOM is a space-qualified product and has a power consumption rate of approximately 5 W. 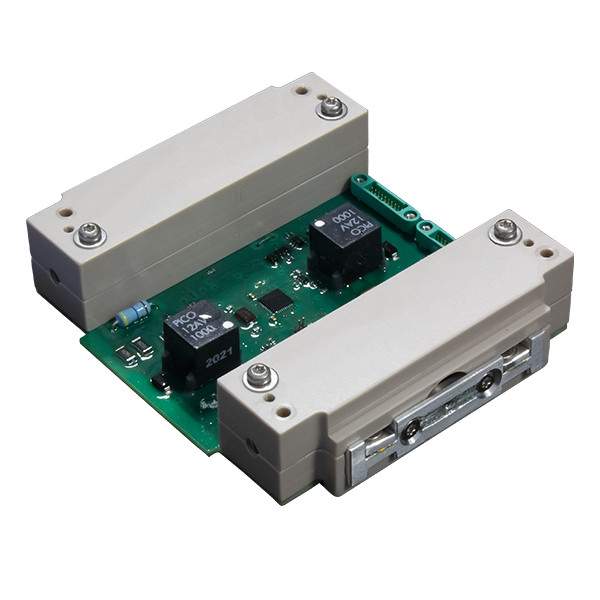 The Aurora Propulsion Technologies Aurora Plasma Brake - Small (APB-S) is a lightweight de-orbiting system designed for LEO CubeSats and microsatellites. It can also act as a microtether and an automatic de-orbiting system to de-orbit a satellite in case of power failure. The APB is also available for larger satellites, refered to as APB-M and APB-L.

The Tethers Unlimited NanoSat Terminator Tape is a lightweight de-orbit module designed for nanosatellites. It has solar cells mounted on the top to transfer electric power. Its activation mechanism can be implemented with an input power of 9W or 28W, through a shape-memory alloy (SMA) actuator. 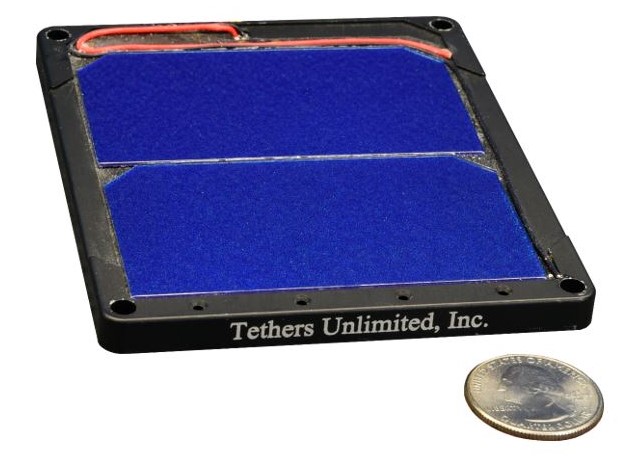 The Tethers Unlimited CubeSat Terminator Tape is a lightweight de-orbit module designed for CubeSats. It has solar cells mounted on the top to transfer electric power. Its activation mechanism can be implemented with an input power of 3W, through a shape-memory alloy (SMA) actuator.

Thanks for reading! If you would like further help identifying a de-orbiting technology for your specific mission please click here to send us a query and we’ll use our extended global networks of suppliers to find the information you need.