Spotlight: the critical importance of satellite structure components and equipment, with NPC Spacemind

Established in the heartland of Italy’s automotive industry, NPC Spacemind has been bringing cutting-edge design and manufacturing expertise to the space industry for more than 10 years.

Please note that this is an advertorial article discussing NPC Spacemind’s satellite structure portfolio and was developed in partnership with the company.

In nanosatellite design the structural elements are sometimes undervalued compared to other sub-systems. With so much emphasis placed on innovation of the vital navigation, computing, control, propulsion, sensing and communication systems onboard, mission designers can sometimes overlook the opportunities that lie in optimizing mission critical structural components.

This attitude has been exacerbated due to the introduction of the CubeSat standard. In CubeSats the structures and bus have been standardized which has led some users to think that all of the margins for improvement and performance enhancement have already been reached in products described as state-of-the-art.

In reality this characterization is far from the truth; structural design and effectiveness are still key aspects that engineers can optimize in order to achieve the maximum level of performance and deliverable application for mission design.

In addition, the continuous evolution of payload development and application scenarios is placing even greater emphasis on structural aspects of the satellite while opening up new possibilities for engineers.

These opportunities arise in two distinct areas; the performance of the structural element and the handling capability during satellite development. 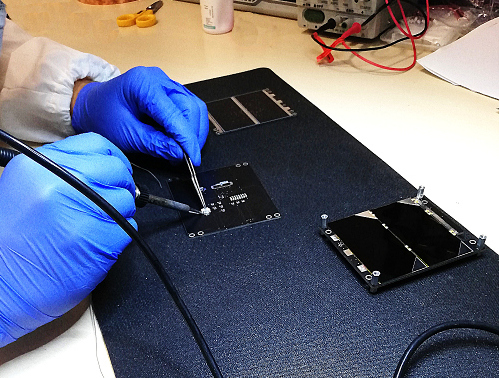 Performance – It might seem obvious at first glance, but it is important to remember that simply satisfying a design’s performance requirements is not the same as achieving the best possible performance available. Where structural equipment is concerned, taking the approach that requirements should just be satisfied will limit the performance that could be achieved as well as the range of mission goals that may be considered – this is particularly true where nanosatellites are concerned.

Handling – In a similar manner, handling requirements are also often neglected in the early stages of mission or platform design, yet can become critical during the advanced phases of development. However, when a satellite is in the latter stages of integration and testing the actions that can be taken to mitigate poor handling capabilities are very limited and any structural issue uncovered can result in significant and costly delays.

Mission and satellite designers who are seeking to develop the best possible system to meet their goals should carefully consider whether the structural decisions made early in the process could severely limit their potential further down the line.

NPC Spacemind’s decades of experience in electromechanical manufacturing and assembly of complex robotic groups has given the company a deep appreciation of best practices in structural component design and manufacture. This can help satellite producers avoid placing these limitations on their equipment unnecessarily and has enabled the company to develop an innovative portfolio of structure products.

The benefits of SM structures

NPC Spacemind’s portfolio of SM structure products has been designed to address the challenges and opportunities that satellite manufacturers face on a daily basis.

SM structures are high-reliability CubeSat structures that suit a range of CubeSat unit sizes. The structures have been designed for flexibility and to maximize performance in terms of available space, volume and mass. The products have the following key features:

Lightweight – SM structures are currently the lightest structural products on the market. This enables engineers to extract the maximum levels of performance and capacity in spacecraft design, allowing the mass budget to be better exploited for payload and sub-systems.

Redundant switches – SM structures feature a redundant number of deployment switches with respect to CDS guidelines. This key aspect allows incredible flexibility for the user, bringing the possibility of including multiple independent payload/sub-systems. Nevertheless, this feature also allows full compliance with specific launch providers (e.g. as specified by companies such as Nanoracks) which usually require a redundant inhibition system while in the deployer.

A flexible design and assembly concept – SM structures are intuitively designed in order to simplify the assembly and design processes of the satellite allowing a huge margin of flexibility. The structures are precision-engineered to introduce the minimum number of design/interface constraints allowing the spacecraft design to be free and highly focused on the functional objectives.

Structural products should secure, enhance, support and facilitate the components and sub-systems that make up the rest of the satellite. SM structures help achieve this through a standardized product that can be adapted to specific satellite requirements and development constraints.

For example, customers are free to determine stack configuration in terms of length, use of frames, mounting direction and orientation. These design aspects greatly enhance versatility in the case of 6U and 12U form factor satellites where the ability to mount stacks not only vertically, but also horizontally and transversely, increases the possibilities of satellite design and integration of complex payloads.

In addition, it is also possible to select different end-frame configurations in order to allow for the integration of multiple payloads.

SM structures are also carefully designed to enable compatibility with other commercial components. Today’s satellites are often produced using a variety of different vendor hardware in order to get the best trade-off in terms of functionality and cost. However, many commercial solutions still limit the user’s ability to incorporate third-party equipment, due to compatibility and interface issues.

This can limit the creativity and engineering capacity of a nanosat developer and is something that NPC Spacemind has worked hard to minimize. All SM structures are designed to embrace compatibility with the majority of commercial hardware and standard layouts available.

This capability is vital in situations where it is necessary to assemble and disassemble the satellite several times for tests and iterations. A good structure must be designed not to introduce difficulties or long and complex assembly/disassembly methods that can waste time and costs and that is the exact approach NPC has taken.

Spacemind was set up in 2013 and operates as the aerospace division of New Production Concept S.r.l. (NPC). Increasingly, NPC Spacemind is assisting clients across the space sector with complex design, manufacture and assembly challenges – particularly in the use of structural components for CubeSats and nanosats.

Electromechanical manufacturing companies have spent decades optimizing approaches to complex manufacturing and NPC Spacemind is able to bring direct experience of this thinking to the space sector. Working as an expert partner on mechanical systems projects, the company is able to help satellite manufacturers with both individual projects and build development capacity for the future.

A wide variety of technical challenges relating to satellite manufacture can be addressed through a more sophisticated approach to design and assembly. NPC helps clients make better choices at these stages, such as optimizing structural stability for optical payloads or simplifying iterative assembly processes.

To find out more about NPC Spacemind’s heritage, products and services, please view our spotlight article discussing the business here on the satsearch blog.